What Does a Virtual Reality Filmmaker Do? A Conversation with Gev Miron

The average person has a range of view of about 135 degrees. Film director Gev Miron, however, is no regular person, and has made a career out of working with a range of 360 degrees. No, he’s not a super human cyborg, but a film director who works primarily in the world of virtual reality, creating tantalizing 360-degree experiences for his viewers.

This amazing medium is still in its infancy, and Gev is one of the pioneers of creating premium 360 content with his production company MVH Creativeworks.

Originally from Tel Aviv, Israel, Gev has been making waves in Los Angeles for the last seven years, and he continues to push the envelope and experiment in the rapidly expanding world of virtual reality.

If you’ve ever wanted to cook breakfast with Gordon Ramsay, chill and watch videos with Snoop Dogg, or go behind the scenes of the Emmys with Jimmy Kimmel, Gev’s work is literally something you want to immerse yourself in. 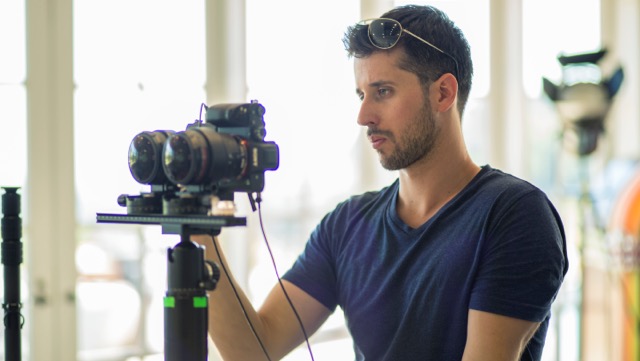 Lucy Sosa: For those of us who don’t quite get it, what is VR anyway?

Gev Miron: VR is virtual reality! It’s a relatively new form of experiencing video content that literally immerses the viewer in the middle of a scene or a situation through a headset that fits over your eyes. Rather than passively view a movie, you can look around in any direction in VR and choose what you want to focus on, and in some cases, even walk through a scene as you wish.

The simplest form of VR is 360 video, which can be viewed on a computer screen, tablet, or a smartphone and allows the viewer to move the screen to look around them in all 360 degrees. For a more immersive experience, the viewer will actually put on a headset and move the range of view by actually turning their head and looking around.

LS: Wow. That’s insane. Are you from the future?

GM: Yes, actually! But really, VR is very new and rapidly getting more precise and more intricate. It’s amazing to see the possibilities unfolding and there are limitless places to take this new technology, even beyond entertainment and gaming.

GM: Well, there are countless applications in the fields of medicine, engineering, journalism, and architecture. Just imagine, instead of approaching a problem with one set view, you can immerse yourself in a virtual simulation of any problem you want to solve. A doctor could participate remotely in a complex medical procedure, or design a product from the inside out, using a virtual model.

LS: Wow, it sounds like VR has the potential to disrupt multiple industries. Your focus though is primarily entertainment. What is the biggest challenge of creating VR entertainment?

GM: The biggest challenge is camera placement. The viewer is the one who chooses where to look and for how long. My job as a VR creator is to allow the viewer to have the most interesting point of view. The traditional roles of director, cinematographer, and editor are very different in virtual reality because unlike traditional film, you can’t tell the viewer exactly what to look at and for how long. It’s all up to them, and you have to trust them to make the most out of the experience. My job is to allow the viewer to just be. 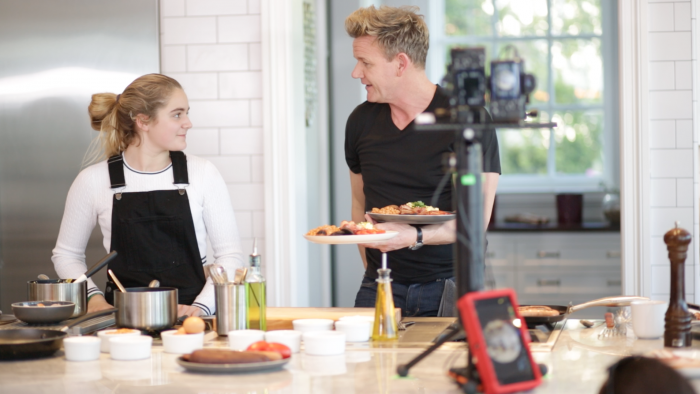 LS: What about actors? Is it different working with actors in VR?

GM: Absolutely! Unlike traditional film, there are no close ups or medium shots. It’s all one big wide shot. The job of the performer in VR is much more similar to an actor in the theater than an actor in a regular movie. The performer needs to be aware of his or her total surroundings and any interaction with those surroundings, because everything will read to the viewer. Also, if the performance is not compelling enough, the viewer will just look away! So much like theater, the actor needs to be in character for a longer duration, because there are no quick cuts or reaction shots. Everything is on camera all the time. 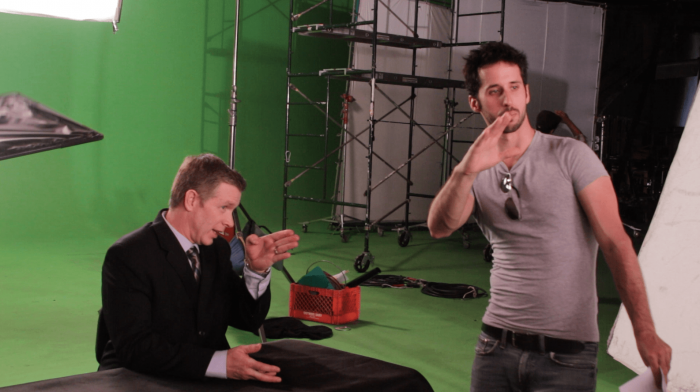 LS: As a film director, how did you end up in the world of VR?

GM: A couple of years ago, when VR was in its earliest stages, a friend of mine at the content company Surreal introduced me to the 360 technology and asked me if I was interested in adapting my proficiency with film directing to this new virtual reality technology. It didn’t take more than a single VR experience to convince me that this was the next big advancement in entertainment experience. I was hooked. I immediately bought a headset and began exploring the possibilities. When Facebook decided to launch their 360 video platform, things really took off, and together with Surreal, we started creating immersive content.

Not long after, we helped YouTube launch its own platform, working with Snoop Dogg on Snoopavision, which took off with millions of views. Since then, we’ve had the pleasure of working on the Grammys®, the PGA® Tour, the Golden Globes®, the Oscars®, and many more.

LS: But what about the technology? You just picked up the camera and immediately knew how to shoot VR?

GM: Ha, no. It’s been a real learning process. It’s so different than shooting traditional film or video. It’s hard to wrap your head around it, and not just because it’s wrapped around your head! (laughs) You shoot with multiple cameras simultaneously which is super challenging at first, because the cameras need to be perfectly aligned and synced, otherwise it won’t look real. If your subject is too close to the camera, for example, you run the risk of creating an unwanted parallax effect. 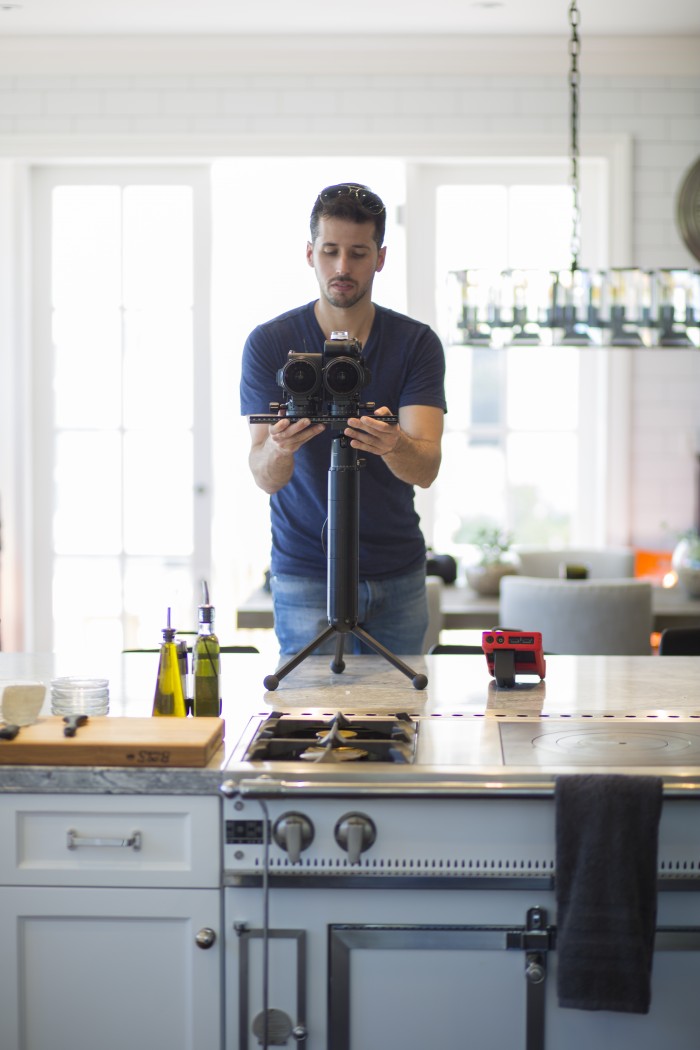 LS: Parallax effect? Isn’t that a sci-fi movie from the ‘90s?

Parallax effect is a pretty common issue that a lot of VR content creators run into, especially when they’re just starting to shoot VR. Unwanted parallax effect could completely ruin your shot. Because you’re working with multiple lenses pointing in different directions simultaneously, a subject that moves too close to the camera will cause distortion or a double vision type effect. So, we want to avoid it at all costs.

Another crazy challenge of VR is figuring out where to put your crew.

LS: Right, because you can’t just have them behind the camera, since the camera will see everything in all directions!

GM: Exactly. We try to work with very small crews and try to find creative ways to hide from the camera. Same goes for equipment, lighting, and sound. On bigger projects, when we have time, we’re able to remove some of these unwanted visuals in postproduction. On projects that require quick turn around, we have to be stealthy and creative. Rehearsal helps a lot! Also, remote monitoring technology comes in very handy. 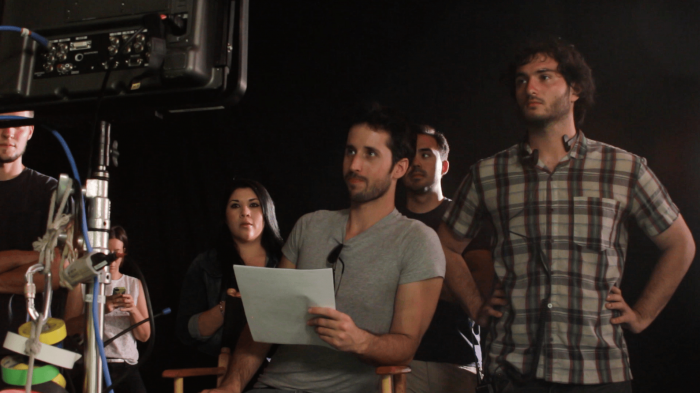 LS: You mentioned sound. How does sounds record differently in VR? Can you record sound in 360 degrees?

GM: Yes! There are a few ways to do it. Spatial sound is a big thing now.

GM: Actually, it isn’t! This method of sound recording actually adapts to where the viewer is facing and where the sound is coming from in the space. So for example, if you’re in a room and a zombie attacks you from behind, you can hear it coming from behind you. When you turn, the sound adapts so that it’s coming straight at you.

GM: That is exactly the point! The aim, of course, is to have the viewer feel like their experience is as real as possible. One of the earliest videos we did was a horror challenge called Five Nights at Freddy’s. It was based on a very popular video game.

LS: What was the challenge – to make it through the video without having a heart attack?

GM: Actually, yes. You’re placed in different rooms in the house and the challenge is to find Freddy, who is a terrifying doll as he randomly pops up to scare you. If you make it through the whole thing, you win the challenge.

GM: I don’t know, not dying from terror? One of the funniest things that came out of making that video are the reaction videos that it spawned. You can watch dozens of other people during their VR experience lose it as they try to make it through the whole thing.

LS: I also want to ask you about postproduction. I can’t even picture how you get all the images laced together.

GM: Yes, though the process is way more than just sticking the images together. We have to make sure everything is synchronized correctly and that the images overlap to form a cohesive action. We call that image equirectangular video, which is a stretched version of the 360 image, kind of like a stretched out world map that we then have to map to the inside of a sphere.

GM: That’s another challenge of VR! We want people to be impressed, but not so surprised by the experience that they are disoriented, which is why we pay a lot of attention to camera movement and cuts. Edits that might be normal in regular film, would be jarring in 360. So part of the challenge is to allow each shot to tell a story. Shots usually run longer than in traditional video. Also, because the medium is newer, early viewers of VR do need a little more time to get settled and comfortable with the all-encompassing nature of the experience.

One thing we’ve noticed from our viewers is how they talk about their experiences with VR. Rather than saying they saw this or that, they say where they were, where they’ve been. This tells us how completely immersive it feels, especially to the newer viewers. 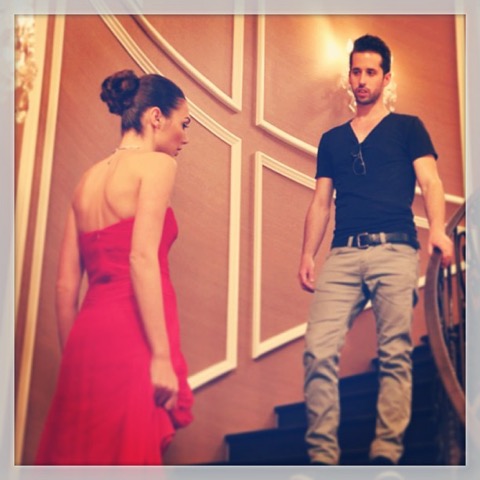 LS: Is VR the future of filmmaking?

GM: I don’t think VR will ever replace traditional television or film.

LS: That’s kind of a relief. Why not?

GM: Well, people still read books! I definitely don’t think VR is a replacement, but the medium does offer an entirely new way of experiencing narrative content, even of existing I.P. Many of the studios today are creating supplemental virtual reality experiences of their biggest movies. They’re finding that audiences are able to develop an even stronger connection to the story and characters of the world if they have access to platforms like virtual reality.

Imagine getting to sit behind the scenes with your favorite stars after you’ve watched them in a movie. We’re even creating supplemental VR material that allows the viewer to participate in a scene with characters from their favorite movies. We’re only beginning to realize how real the personal connection can be when you experience these narratives first hand. When an actor makes eye contact with the viewer, for example, that experience has affected many of the viewers who feel like the connection becomes far more personal than simply watching another person on a screen.

GM: That’s a great question. VR is so new at this point, that the sky seems to be the limit! One of the reasons it’s so fun to do VR right now is that there are no rules. There is not a fully developed language yet for the medium, so it’s up to us to experiment and invent it! It’s very exciting to talk to people and hear their reactions to VR.

But what’s next? I think we’ll see more and more virtual reality experiences coming out of the biggest creators in the industry. As technology becomes better and cheaper, I think most people will own a headset at home, at which point, it’ll no longer be a novelty but it’ll have its own standard as an art form and it’ll attract new voices as well as newer audiences.

All photos courtesy of Gev Miron.