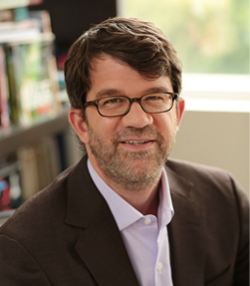 Wyck Godfrey began his career as a creative executive at New Line Cinema after graduating from Princeton University in 1990 with a B.A. in English Literature. While there, he worked on such hits as The Mask, Dumb And Dumber, and various films in the popular House Party and Nightmare On Elm Street franchises. In 1995, he switched to Paul Schiff and Michael London’s production company, Horizon Pictures, as senior vice president of production, where he oversaw their development slate and staff at 20th Century Fox.

He joined John Davis at Davis Entertainment two years later as an executive vice president, overseeing the action hit Behind Enemy Lines, directed by John Moore and starring Owen Wilson and Gene Hackman. He was promoted to president in 2001 and went on to produce I, Robot; Flight Of The Phoenix; When A Stranger Calls; Eragon; and was an executive producer on Alien vs. Predator.

In February of 2006, Godfrey left Davis Entertainment and partnered with his friend, former United Talent Agency partner Marty Bowen, to create their own production company – Temple Hill Entertainment. They secured a deal with New Line Cinema and immediately entered into production on their first film, The Nativity Story, from director Catherine Hardwicke. Next, the two went on to produce the romantic comedy Management, starring Jennifer Aniston and Steve Zahn, which premiered at the 2008 Toronto Film Festival.

The company’s big break came in 2008 when they embarked with Summit Entertainment on the production of the first film in The Twilight Saga, based on the wildly popular book series by Stephenie Meyer. Temple Hill went on to produce all five films, which made over $3 billion worldwide. While working with 20th Century Studios, Wyck and Marty produced several successful titles including Safe Haven; Dear John; A Good Day To Die Hard; The Fault In Our Stars; The Longest Ride; Paper Towns; The Maze Runner franchise; and Love, Simon.

In 2020, Temple Hill signed a first-look deal with Lionsgate Television, where they have been developing and producing premium scripted series for broadcast, cable, and streaming platforms.

In all, Godfrey has produced more than 25 movies grossing over $5 billion worldwide.