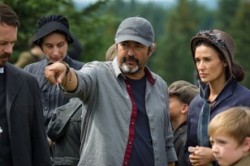 Before becoming a full-time director, Jon Cassar had an extensive background working as a Director of Photography, Camera Operator, and Steadicam Operator on over 35 movies, 70 television shows, videos, commercials and award-winning documentaries.

Jon Cassar participated in eight seasons as the Director/Executive Producer of Fox’s Emmy® and Golden Globe®-winning drama, 24. In this capacity, he directed 10 episodes each season while helping to oversee other production-oriented elements of all the show’s 24 episodes. Mr. Cassar’s strengths in orchestrating action sequences paired with directing dramatic scenes served him well in 24’s high action and intense drama format. Jon also directed the 24 television movie, Redemption, that was shot in South Africa. That project was nominated for 6 Emmy® Awards.

Jon was also Executive Producer and Director of the Reelz Channels eight-hour Emmy® nominated mini-series The Kennedys. The show took home 4 of its 10 nominations. He directed all 8 episodes of the series and received a DGA award for Outstanding Directorial Achievement in Movies for Television and Mini-Series (2012). He recently had the same duties on the sequel After Camelot, which premiere in April 2017, and stars Katie Holmes and Matthew Perry.

He was involved on the TV series Terra Nova for FOX. He joined Steven Spielberg and Peter Chernin as an Executive Producer and Director and oversaw production of the first season’s 13 episodes that were shot in Queensland, Australia. He also directed 5 episodes.

Mr. Cassar received dual Emmy® Awards for directing and producing 24 (2006) for its fifth season. As a director, Mr. Cassar also received the prestigious DGA award twice, for 24 (2006) and The Kennedys (2012) and also won two Directors Guild of Canada awards for The Kennedys. He has been nominated for Canada’s Gemini® Award for directing La Femme Nikita and won a Canadian Society of Cinematographers award for his camera work on a documentary about Canada’s lumber industry.

In 2016 two of Jon’s feature films were released – the feature film Forsaken, a Western starring Kiefer and Donald Sutherland, Demi Moore, Bryan Cox, and Michael Wincott, and When the Bough Breaks, a thriller with an African-American cast that included Morris Chestnut, Regina Hall, and Michael K. White. The film grossed $30 million on its $10 million dollar budget for Sony.

Mr. Cassar is also the author and photographer of 24: Behind the Scenes, a pictorial look at the making of 24 (Palace Press, 2006).

Mr. Cassar is a graduate of the Radio and Television Broadcasting program (1983) of Algonquin College, in Ottawa, Ontario, Canada. Jon received the 2011 Premier’s Award for Creative Arts and Design.

Jon continues to be involved in television and feature film development.