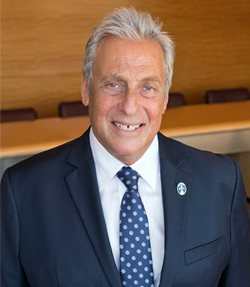 At the Producers’ Guild, Koch and his former co-president, Mark Gordon, led the fight to preserve the producer’s credit and restore its value to working producers. In 2013, they were able to secure all the major studios and major independents to agree to uphold the Producer’s Mark, which unified the industry in a way that further reinforced the significance of the real producer. Now, only the producers that do the work and get the Producer’s Mark are eligible for the Academy Awards®, the Golden Globes®, the Producers Guild Awards, and the BAFTA Awards®.

While at the Academy, Koch spearheaded several initiatives – including launching the first ever general membership meeting, a sharpened focus on member engagement, and the future of filmmaking, as well as major fundraising for the new Academy Museum.

Koch has been intimately involved with the making of more than 50 major motion pictures among them such classics as Marathon Man, Chinatown, Wayne’s World, Peggy Sue Got Married, Heaven Can Wait, and Rosemary’s Baby.

His colleagues and collaborators include many of the greatest filmmakers of all time – Sidney Pollack, Roman Polanski, John Schlesinger, Warren Beatty, and Francis Ford Coppola. In addition to his duties as a full-time producer, Hawk also serves on the boards of the Motion Picture and Television Fund, Cast & Crew, AMC Theatres, and the National Film Preservation Foundation.