Google Brings Lies About “Free Speech” Back From the Dead

It looks like Google’s propaganda machine is set on autocomplete – and keeps delivering the wrong answer.

Just about every time the conversation turns to reducing piracy, Google and its shills go into the wolf cry of SOPA. (See Google lawyer Marvin Ammori’s absurd article in Slate and the brilliant, scathing rebuttal from Sons of Anarchy creator Kurt Sutter.)

Now, in response to serious questions raised by law enforcement on how Google profits from stolen intellectual property and other illicit activities, Google is again using scare tactics to deflect blame, raising the specter of “Zombie SOPA.”

In March, Ammori said the same thing about proposed voluntary agreements that legitimate businesses could implement to stop the flow of revenue to pirate sites.

But, in fact, Google is the one constantly bringing lies about threats to “free speech” back from the dead.

The creative community will not remain silent about the theft of creative works. Nor will we allow Google to bully us into accepting a status quo in which Google, a major American company, distorts the First Amendment in order to shirk their responsibilities.

Finally, here’s what real creators do with zombies. 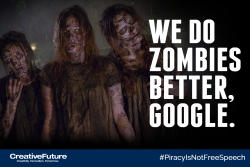 “An A+ Score for an F- Job”: Updating The Facebook Timeline of Scandal and Strife