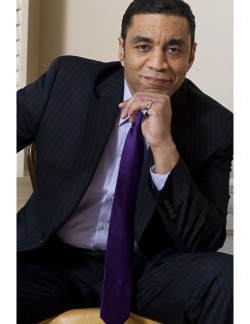 Harry Lennix is a distinguished film, television, stage actor, and producer. For the last seven seasons, he has starred as Harold Cooper, Assistant Director of Counter Terrorism for the FBI on NBC’s The Blacklist. NBC recently announced that the series will return for a ninth season. Moviegoers know Lennix from his breakout role as Dresser in The Five Heartbeats, General Swanwick in Man of Steel and Batman vs Superman: Dawn of Justice, Commander Lock in The Matrix and The Matrix: Reloaded, and the Oscar®-winning Ray. He is regularly seen on Showtime’s Billions.

A proud Chicagoan raised on the city’s South Side. Lennix announced in December 2020 that he is creating The Lillian Marcie Center and AAMPA (African American Museum of The Performing Arts) – an arts complex he calls “the Black version of Lincoln Center.”

In February 2018, Lennix made his off-Broadway directorial debut with A Small Oak Tree Runs Red at The Billie Holliday Theatre. The original production, first staged at Chicago’s Congo Square Theatre as part of their August Wilson New Play Initiative, was also directed by Lennix. The New York production was honored with the prestigious Audelco Award for Best Production.

Lennix made his Broadway debut in Pulitzer Prize-winning playwright August Wilson’s Tony®-nominated Radio Golf. He has directed and appeared across the country in productions including Northlight Theater Company’s Permanent Collection at LA’s Greenway Arts Alliance (later remounted at The Kirk Douglas Theater). He directed the stage version of Robert Townsend’s The Five Heartbeats, which received three NAACP Theater Award nominations and The Glass Menagerie for Chicago’s Steppenwolf Theater Company. He also starred in August Wilson’s King Hedley II at the Mark Taper Forum.

Lennix’s stage work earned him the first Ollie Award for his portrayal of Malcolm X at the Goodman Theater in Chicago and two Joseph Jefferson Citations for his starring role in Ma Rainey’s Black Bottom and Caught in the Act. In 2001, he was part of the first American company to be Invited to the Royal Shakespeare Company in the production of Cymbeline.

In July 2014, Lennix created Exponent Media Group, a movie production company he founded with longtime Chicago associate Steve Harris. Films completed include Troubled Waters, which was one of the highest rated films on BET Plus and H4, a fresh interpretation of Shakespeare’s Henry IV shot on the streets of South Central LA. The third film, Revival!, is a retelling of the gospel according to John the Apostle. A joyful blend of Gospel fantasia, the Broadway musical and historical drama starring Mali Music, Chaka Khan and Michelle Williams, premiered in Washington D.C. at The Museum of The Bible and opened in key markets Easter Weekend 2019.

He has appeared in the Golden Globe®-nominated ABC series Commander in Chief as Chief of Staff to POTUS and starred as political activist Adam Clayton Powell, Jr. in Showtime’s Keep The Faith Baby, winning a Black Reel Award, a Golden Satellite Award, and a NAACP Image Award® nomination. Additional credits include Fox’s Dollhouse and House, HBO’s Little Britain, NBC’s ER, CW’s Emily Owens, M.D., and the critically acclaimed 24, among many others.

In 2017, Lennix was asked to donate his personal archives to Boston University’s Howard Gottlieb Archival Research Center. The Center, which houses Dr. King’s papers, felt that Harry’s moral awareness, learned through his early training for the priesthood, exemplified a commitment to creating faith-based entertainment for an underserved audience. This is a topic he lectures on as a visiting professor as well.

In the 2016 and 2008 presidential election he served as a surrogate for Secretary Clinton, campaigning for her in Pennsylvania, North Carolina, and Michigan. He has also campaigned for a variety of other candidates including Maryland gubernatorial candidate Ben Jealous.

In 2019, he was named Ambassador for the Prostate Cancer Foundation and brings his message of early detection through PSA’s and public speaking. He serves as Spokesman for NOBLE, the National Organization of Black Law Enforcement Executives, and is an ambassador to the National Association of Drug Court Professionals. He is on the Advisory Council of Northwestern University, his alma mater, and is a board member of Reading Rescue, a training program for educators teaching reading skills to at-risk elementary school children. Lennix remains committed to a variety of programs in his native Chicago where he was an English and elementary school music teacher.

He is married to Djena Graves Lennix, a businesswoman. They reside in Los Angeles and New York.