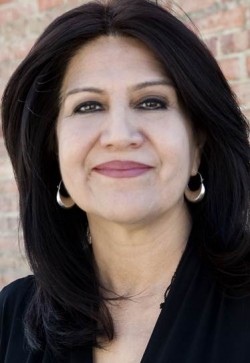 Fernández is an award-winning actor and writer. Born and raised in East Los Angeles, she attended Garfield High School, East L.A. College, and Cal State University, Los Angeles. While at Cal State, she found her niche in Chicano Theater. Fernandez starred in film roles with Edward James Olmos, Paul Rodriguez, and Cheech Marin in A Million to Juan (1994) and in Luminarias (1999) with Scott Bakula, Robert Beltran, and Cheech Marin. She was nominated for a Desi Award and is a recipient of Nosotros’s Golden Eagle Award for her portrayal of Julie in American Me (1992) and the Alma Award for Hollywood Confidential (1997). She won the Best Actress award at the Ibero-American International Film Festival in Huelva, Spain for her performance in Luminarias (1999) and her second Golden Eagle Award for Outstanding Writer for Luminarias (1999).

Fernández’s professional acting career began in Luis Valdez’s Zoot Suit as Della, the female lead in the original stage production at the Mark Taper Forum. After Zoot Suit, she toured nationally and internationally with El Teatro de la Esperanza. Among her many appearances she has performed at the New York Shakespeare Festival and the Denver Center for the Performing Arts. A founding member of the Latino Theater Company (LTC), Fernández acted in several productions at the Los Angeles Theatre Center, including La Victima, King Lear, Etta Jenks, Roosters, Stone Wedding, August 29 (which she co-wrote and starred in with members of LTC), and the stage production of Luminarias.

Fernández’s writing credits also include the plays Premeditation and How Else Am I Supposed To Know I’m Still Alive, the latter of which has been produced throughout the U.S. and adapted into an award-winning film for the Universal Hispanic Film Project (CineFestival Special Jury Award). Her screenwriting credits include East Los High (2013) and Luminarias (1999). She is adapting her stage play, Dementia (commissioned by the Mark Taper Forum), for the big screen.

She is also a poet and a motivational speaker, performing and speaking in schools and community centers throughout California and the Southwest. She and her husband, José Luis Valenzuela, Artistic Director of the Latino Theater Company and Professor of Drama at UCLA, have two children. They reside in East Los Angeles.